I’m sure you’ve heard it before. It’s a common way to dismiss some aspect of a person’s identity or life that you don’t want to acknowledge, while claiming to know that person better than they know themself. It can refer to sexuality, gender identity, interests, career aspirations, political/religious beliefs, and basically anything else. Younger people tend get it a lot.

Usually, people defend themselves by trying to prove that the aforementioned quality is not a temporary phase and is instead a permanent part of who they are. This is completely valid and I have done it in more than one context, BUT I also believe that no one should ever even have to make that argument because the entire idea behind “it’s just a phase” is really an awful and illogical reason to trivialize someone’s identity, experiences, or desires. 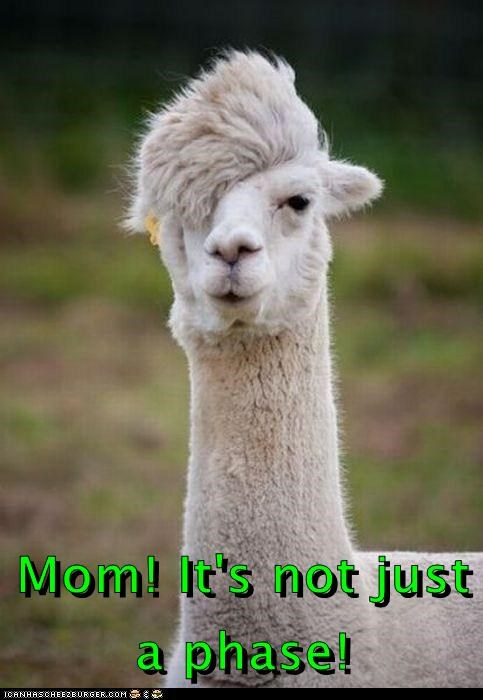 The assumption is that whatever someone is right now is more of an transient experience on the way to becoming the fully-fledged, real, predestined, unchanging “true” self. They’re more of a pre-person than an actual current human being.

But when exactly do people turn into their “real” self instead of some less-real self-in-transition. When they’re 30? 40? When they completely stop changing? For how long? 5 years? 20 years? Forever?

If we’re going to take those standards to their logical extension, pretty much nothing is real. Imagine these conversations:

It’s okay, we all go through hetero phases.

This guy knows it.

Sorry, was that last one too morbid? But lets be real, the only permanent state in human existence is death (maybe–even that one is arguable). If we’re going to use permanence as the golden standard of legitimacy and “realness,” we’re left with a very narrow and pretty depressing view of reality.

Of course, no one claiming “it’s just a phase” actually comes to this conclusion because they don’t actually apply that permanence standard universally. It’s not exactly a coincidence that people only declare qualities that they dislike or don’t understand to be “phases” while automatically assuming qualities they like or identify with to be legitimate. Since we’ve established that permanence isn’t an actual thing, can we agree that “it’s a phase” is just a method of dismissing a present reality that you don’t like/understand by assigning more legitimacy to an imagined future which you like better?

So, yes it may be very likely that “it” (what ever it may be) is actually not a phase (relative to a person’s life span, anyway). But so what if it was? Even then, it still wouldn’t be “just” a phase. People have every right to go through phases, because humans are living, breathing, dynamic beings who are don’t have to be the same people today as we will be tomorrow to prove that we exist.

If phases aren’t real and important . . . what is?

So go along with your little “living” phase and make it as real and fabulous as you want to, without challenging the existence of anyone else’s. Have fun!

Lets think about it. What are the possible outcomes of telling me I look tired:

The truth is, the likelihood of me getting this comment has a stronger negative correlation with how much makeup I’m wearing than how much sleep I got. In fact, I may be especially well-rested on my “tired” days because I decided to sleep in instead of putting makeup on. It makes sense. Makeup is designed to make faces look brighter and more vibrant and whatever else we consider “not tired” to look like. Sometimes I care about that and sometimes I don’t.

But lets be real. Particularly if you are in college, most people around you probably are tired. Students do a lot of things and just don’t sleep very much. Sometimes we manage to cover it up by putting on nice clothes, makeup, and a cheerful demeanor–a performance, really–and other times it doesn’t seem worth it. Both options are okay. No one owes it to anyone else to appear like their life is perfect. But when we hear “you look tired” it feels kind of like a criticism of the performance. Like we need to work harder on looking like we have it all together.

Because unless you are a mind reader, you are not actually commenting on a person’s feelings, even if you want to be. Trying to tell someone else how they feel is both annoying and not useful. They already know how they actually feel.

If you are genuinely concerned about someone because they are falling asleep at their desk, “you seem tired” is a somewhat better alternative. Or better yet, just ask them how they are feeling out of respect for the fact that they know their own feelings better than you do. Or if you’re just an awesome person, actually help them by offering to make them coffee or give them a back massage (warning: the latter suggestion can be either wonderful or super creepy depending on the context of your relationship. Use your judgement).

“You look like a dancer.” It’s a pretty common response when I tell people that I am a dancer. It’s supposed to be a compliment, because “looking like a dancer” is something that people (particularly of the female variety) are supposed to want to do, even those who don’t actually want to dance. And I actually do feel a little complimented, but I also feel a little uneasy.

Why it’s a weird statement if you actually think about it:

Now people, I get where you’re coming from. The observation itself, though stereotypical, is not totally off base. I too sometimes play “dancer spotting” on the streets (though posture and movement habits can be bigger indicators than body type for me). I just hate that every dance-related conversation has to go in that direction immediately.

People are looking for some relevant comment to add about dance and that’s the first thing that comes to mind. But that’s exactly what bothers me. The most publicized thing about dance right now is the “dancer’s body.” The new thing is workouts with “barre” or “ballet” in the titles which promise to make people “look like a dancer” without doing any actual ballet. (Note: if you like barre workouts that’s totally cool. Some of them seem pretty good. I just wish actual dance classes were as marketable/accessible.) Whenever professional dancers are interviewed by mainstream publications, their diet and exercise routine is often the very first question.

Why is this a problem? Dancers do a lot of stuff. We learn and internalize a technique or multiple techniques with an enormous range of details about alignment, movement paths, specific muscle engagement, and quality. Then we selectively use, discard, and warp these details to fit the needs of choreography. Which, by the way, we learn a lot of, often insanely quickly. Sometimes we participate in the creation process through improvisation or movement experimentation. We go on stage fearlessly, making any feelings of unpreparedness, nervousness, or doubt invisible, while simultaneously exposing our souls (for lack of a better word). And that’s just the dancing itself, not all the additional aspects of navigating training or the professional world. Trust me: looks are one of the least interesting things about dance.

“Okay, maybe for you,” you say “but I’m not a dance person and I don’t really know/care/know how to talk about that stuff. I am, however, interested in having a perkier butt.” You are entitled to like perky butts. But I don’t want you to feel like dance itself is something you can’t access. Dance can be expression or intellectual commentary or pure aesthetics or a primal instinct or a ritual or an act of romance or someone bopping around naked in their bedroom or a bunch of people bumping against each other at a party, but it’s always movement. Movement that can feel great and be worth it in itself regardless of the butt that’s doing it or the butt that results from it.

There are the obviously offensive/annoying comments that people say in offensive ways. I usually have no issue calling these people out or at least giving them a deadly look. (On an unrelated note, I sometimes give these looks unintentionally, which leads to me explaining to people that I don’t actually hate them. I need to work on my “neutral face.”) Then there are other comments that come in the form of complements or polite remarks from well-intentioned acquaintances, but are still tainted to varying extents with problematic assumptions of sexism/racism/elitism/heterosexism/condescension/body judgement/just-kind-of-annoying-ism. In these cases, I usually just smile and nod, because these people are usually just trying to make small talk and say something that is typically viewed as appropriate. They don’t really want to be lectured.

I came up with the phrase “it’s not you, it’s society” when talking to a friend who was annoyed that people constantly call her “cute” or “adorable.” Given that she’s a smaller woman with a feminine style, a lot of people automatically use those words to describe her and things she says/does (including myself). These comments make her feel infantilized, but she acknowledges that they’re more of a socially-ingrained reaction and doesn’t like to call out individuals for just for repeating them. Thus, “it’s not you (person who repeats things that bother me), it’s society.”

I’ve decided to make a little series about all the innocent little comments that really get to me, not to accuse any of the perfectly nice people who have said them to me with good intentions, but to point out the general attitudes behind them that piss me off.

I have a lot of dance-related ones in particular, since most of the general public has a pretty shallow experience with dance (it’s okay, no one is well-informed about everything), and not every conversation is the place for me to play “arts educator.” But some are related to other parts of my life as well.